Blue Star Ball, may it rest in pieces.

Based on a true story

You know those balls you can get at the grocery store? The ones in the bin, all different sizes and colors and they cost about $2? Those are one of my favorite things. When I was little, we would get a new ball at the beginning of each summer. It was a real treat and my brothers and I loved that ball so much. It could bounce so high and you felt like a superhero when you kicked it because it would just fly far, far away. Well this is the story of one of those beloved balls.

I am lying in bed with a bit of a cold. Truth be told, I was milking the cold so I could read my book and snuggle in the covers a bit longer. I don’t feel too bad because the kids were playing together and being quiet, so it seemed ok.

From the living room I hear the kids.

Chhhhhhh – the sound of a bike pump pushing air,

My son comes running in crying “I popped my (sob) ball and (sob) it hit me in the (sob) toe, and it really hurts” the tears are rolling down his face, he looks confused, shocked, and sad all at the same time.

My daughter comes in next, holding a piece of the ball in each hand, and says, very matter-of-factly, “Two things: I now know what the inside of the ball looks like and, you should have stopped at four.”

I completely lost it; I am laughing so hard at this point. My son was still crying “This isn’t funny Mom. Why are you laughing? My toe REALLY hurts!”

I just couldn’t control myself I was buckled over with laughter; I nearly fell out of bed.

“You probably didn’t think you could actually pop the ball, did you?” I ask him.

“NO, Devon said it looked like it was going to pop (I bust out even more) but she told me to do five”.

“I said, don’t do five” she corrected.

I was trying to be comforting to my son, but when you are laughing hysterically it is a bit difficult to be sincere.

Not too much later my son goes out and gets another ball. This one is bigger than the last one, and he has it in his hands and says, “It feels a bit squishy; I think it needs to be pumped up.”

I look at him completely shocked “I mean just a little bit” he adds quickly. 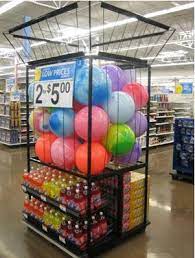 The bin of bouncy balls, the home of all Blue Star balls! 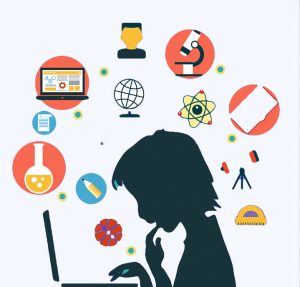 “Many creative people are ADHD and because of the way they look at the world, they have created beautiful art, science, and even mathematics and connected with us as humans through their work.”

Attention Deficit & Hyperactivity (sometimes) Disorder. The word disorder generally denotes a negative, but the actual definition is “a functional abnormality or disturbance”. ADHD is abnormal because less than 10% of the population has ADHD. ADHD is a way of thinking and viewing the world, not a defect of some sort. Attention Deficit is a bit of a misnomer. It is not that they lack attention, it is that they do not keep their attention on one topic for long. This is more a focus deficit than attention deficit. Focus Deficit and Hyperactivity (sometimes) Disorder (FDHD;-).

Attention: to take notice of something or someone.

Focus: the center of interest or activity.

So, staying focused on someone or something is a matter of the object keeping your interest.

ADHDers take notice of many things – Attention. However, they do not stay interested long – Focus.